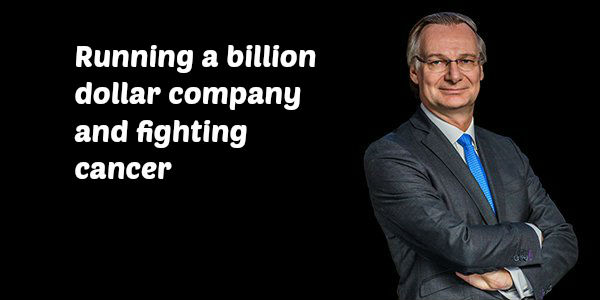 Pierre Nanterme, Chairman & CEO of Accenture sends message to clients, colleagues and shareholders informing them about his cancer

Pierre Nanterme held the position of Chairman and CEO since 2011, sends out a communication to his colleagues, clients, and shareholders informing them about his medical condition.

He has been diagnosed with colon cancer and has undergone a surgery. He would be still handling his day-day responsibilities but will not be able to do extensive travel for couple of months. He would have to undergo another surgery very soon.

Accenture management has been informed prior about his health condition, and he is getting full confidence and support from them. In the communication Pierre says that he has full confidence on the leadership team to drive the company and serve the customers.

Pierre joined Accenture in 1983 and in ten years became a partner. In 2015, he was named to FORTUNE’s “Businessperson of the Year” list of top CEOs. He handles the board of director manages the company, formulating and executing long-term strategies, and interacting with clients, employees, investors and other stakeholders. He is Accenture’s primary decision- and policy-maker, setting the tone for the company’s values, ethics and culture. He has served on the board of directors since 2010 and leads Accenture’s Global Management Committee.

In his 33-year career with Accenture, Mr. Nanterme has held a wide variety of leadership positions across key parts of Accenture’s business. Prior to becoming CEO in January 2011, he was Group Chief Executive of Accenture’s Financial Services operating group, which serves clients in the banking, capital markets and insurance industries. In 2006, he joined Accenture’s global leadership team, where he contributed to the planning and execution of Accenture’s successful long-term business strategy and the implementation of its global operating model.

Young entrepreneurs like us should learn from great CEOs like Pierre Nanterme. He is fighting cancer and handling a billion dollar company that feeds more than 10,000+ families. Accenture’s tag “high performance delivered” is very well proved by this communication.