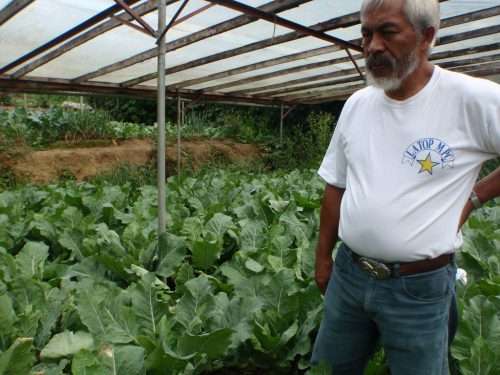 At a time when the Indian media is full of distress stories pertaining to draughts, low agricultural produce, rising vegetable, cereals and rice costs and farmer suicides, two Indian farmers,  Sanjay Nayak (aged 39) and Uday Chandra Patra (aged 67) are minting money! While Nayak, with his exemplary efforts in scientific farming in horticulture continues to script success stories, Patra has made great difference to the agriculture by emerging as a highly successful organic farmer and input producer. Barely eighteen months ago, Nayak had took up entrepreneurship in horticulture and leased a land of half an acre at Mundajore village in Lathikata block and now he has annual earnings of Rs.1.8 lakhs and generates 730 man-days yearly!

Mr. Nayak has graduated from Krishi Vigyan Kendra (KVK) agricultural university and has studied nutrient and disease management in floriculture there. HoD of the horticultural department of KVK University, Jayant Pati said that Nayak’s polyhouse now covers floriculture, fruit orchard and vegetables. Mr. Nayak said that, with technical support from the horticultural department of KVK, he gained confidence to become an agri-entrepreneur and created an agricultural asset base of nearly Rs. 10.5 lakh! He has an annual turnover of Rs. Three lakhs from the sale of flowers, fruits and vegetables and he is also able to provide employment to two daily wage earners throughout the year.

Similarly, Mr. Patra has done diploma in automobile engineering and has established himself as a known face in organic farming and input producer at Kuanrmunda. Patra’s passion for farming made him switch his profession to agriculture. During the initial years, he achieved commendable success with organic farming but is now more interested in fortified vermicomposting and incorporates his own knowledge and experience. He uses indigenous, economic and easy technology to convert biodegradable and animal wastes into the best quality organic manure. He also mixes different organic ingredients to enrich his vermicompost, but keep that as a trade secret. Mr. Patra produces earthworms worth Rs. 10 lakhs, fortified organic compost worth Rs. 40 lakhs and vermi-wash worth Rs. 10 lakhs each year.

Every farmer should be inspired by the success of Mr. Nayak and Mr. Patra and aspire to be like them. Rather than attempting suicide in the wake of failure of crops, they should go to agricultural universities across India and learn ways to improve their crop quality, crop production, security for crops from draught, irrigation and manure for crops and many more techniques to reduce the risk of failure and improve crop quality and quantity. The government of India should also invest much more in founding agricultural universities to support farmers and ensure that every village in India has an agricultural university by 2020. The education at these agricultural universities should either be given free of cost or at subsidized charge, considering the poverty our Indian farmers are in. These steps will improve the Indian economy and the quality of life of the farmers in India greatly. It will also truly justify the tag of agricultural country which India has. Read more on Startups