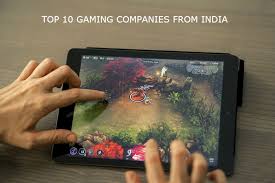 Thanks to Indian games companies for placing India among the leading games developers for global markets! India has been pacing in parallel with other countries in digital gaming and gaming technology. Gaming and technology enthusiasts are entering the market to meet the rising demand for interactive games and tap into the potential of this business niche. The following Indian games companies have been consistently contributing to the games development markets worldwide. Let’s take a walk through them”

Headquartered in Delhi NCR, 19Studios has been designing, developing and delivering digital games for mobile platforms for years. Equipped with state-of-the-art infrastructure and powered by the best of brains in the industry, 19Studios has built a huge portfolio of expertise in game development. Tom and Andy, MacMillan, Web Wabbit, Paint Ball, and My Rooms are some of their clients.

One of the most promising games startups in India, Zebu Games was formed with an initial investment of six lakhs. The idea of getting into mobile games development business hit K Srikrishna and Bikash Chowdhury when they realized how powerful the mobile world is. Homebound and Wordmint are the most popular mobile games in their portfolio. Zebu Games is looking to develop games in multiple Indian languages and monetize their games through in-game advertisement.

99Games is another mobile games development studio that deserves a mention for placing India on the global map of digital gaming. A subsidiary of Udupi based Robosoft Technologies founded by Rohith Bhat in 1996; 99Games mostly develops games for the iOS platform. It has more than 15 game titles in its repertoire till date. Star Chef, Dhoom 3 and SpellUp are some of their milestones in this niche. Most of their games have earned awards from across the globe.

Axis Entertainment Limited came into prominence for its Sara’s Cooking Series of games for the female gamers who are fond of cooking. This Indian company stepped into gaming with a vision and mission to create not just games but brands on international levels. Sara’s Cooking Series of games feature over 125 recipes from across the world and teach female gamers how to prepare those recipes in a fun, interactive and engaging way.

Rolocule, one of the best Indian games development companies, started with an iPhone and an iMac in a small apartment in Pune. Founder and CEO Rohit Gupta borrowed one lakh rupees from his father to buy an iPhone and iMac so that he could make his dream of games development business come true. Since its inception in 2010, Rolocule has been on the rise. Today, it is backed by such leading investors as Blume Ventures, Mumbai Angels and IIM Ahmedabad. The games developed by Rolocule in Pune are popular across 110 countries.

One of the leading game design and development companies in Bangalore, Juego Studios excels in developing visually appealing and high quality games for several platforms including iOS, Android, PC, Mac, Windows Phone and social media. Founded by Suman Balakrishna, Juego Studios has made its way from India to Miami in the United States and London in the United Kingdom. It has successfully executed projects from 11 countries.

Founded in 2012 and based in Noida, Delhi NCR, CreatioSoft is one of the fastest growing games development companies in India. It develops user-friendly, interactive games for entertainment. Till date it has delivered games for Android, iOS, iPad and Windows Phone platforms in different niches such as publishing, online shopping, entertainment, marketing, and technology.

One of the most promising startups in games design and development, GameEon Infotech strives to develop digital games based on original concepts in connection with fun, innovation and entertainment. Incepted in 2013, GameEon is a skilled, creative, ambitious, workaholic team of 11 members including Chairman & CEO Nikhil Malankar, President & COO Prasad Kajarekar, CTO Taral Patel, and CMO Jeet Shah. They have distributed more than 60 games via several partners across the globe.

Based in Bengaluru, Dhruva Interactive is one of the leading game development companies in India. Since its inception, Dhruva has been delivering high-end gaming solutions to global companies. Founded by Rajesh Rao, it has worked on over 100 projects across different platforms. The PC version of the game based on Mission: Impossible, a Hollywood blockbuster, is credited to Dhurva Interactive.