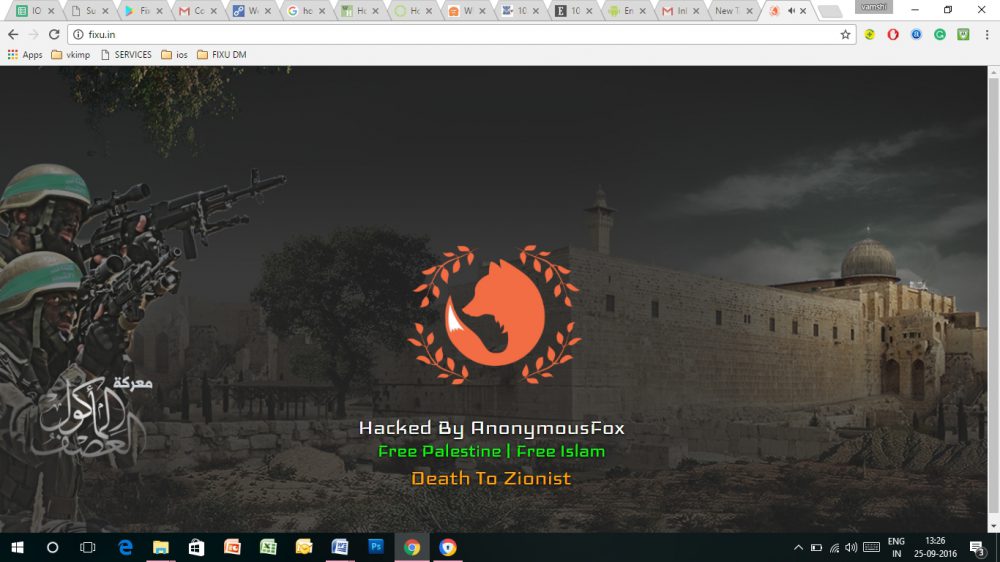 Ever since FixU’s founding in September 3rd, 2016, the company has had over 50 orders for Laundry , Plumbers, Carpenters and other technicians in last 20  days. FixU have more than 280 vendors in their database and are increasing the number every day. In an attempt to get their vendors database for their personal benefit, their competitors had hacked their server on 26th September, 2016. They had deleted all the information that was available on their server about orders and had also modified their home page’s address so that their customers could not place any more orders. They tried to hack their vendors database but could not do so as the Encryption was strong. It took just 10 Hrs of hard work from Satish Sawara & team to recover FixU, the network engineer from Kushaki Tech Ltd. to change their home page’s address back to the originalone and to get their server working normally again. The company will become operational in 24 hours to Strike Back. i.e., on 28th September, 2016.

Knowing all these facts, one cannot but admire the perseverance, courage, intelligence and hard work of Mr. Vamshi Krishna. Despite three repeated setbacks, he persevered, thought and slogged to found and recover a company called FixU which has made the lives of many residential and corporate people easy. Failure had never deterred him from his goal which reflects in his advice to fellow entrepreneurs, “Never let people judge you on your failures. All people see are success and failures but never the effort and hard work. No matter how many times you fall, learn to pick yourselves and try again till you succeed”.

Vamshi Krishna was the founder of two startup companies called Offerswave.com and Localwalt.com. Offerswave.com was started in 2011 and it was a coupon aggregator company which could have now been a competitor to GrabOn or CouponDunia or 27coupons.com. Having planned a bootstrapped expansion into Guntur, Vamshi had overlooked the technical expertise required to spread the firm in the city.“It was going well for a while, but the lack of technical expertise and Startup exposure lead to me closing down my firm” Vamshi recounted. After that,he had founded another Startup in 2013 by the name localwalt.com which had to be closed even before starting. On being asked the reason for failure, he replied, “When it comes to starting up something, perseverance is the key. I had problems like lack of funding and technical expertise in that domain. I found it hard to find a suitable co-founder for my pitch. Everyone was motivated by money back then”.

Being a persistent and bold person, Vamshi Krishna founded yet another startup called FixU in 2016! From where did he get the inspiration for founding this startup? In 2016, Vamshi was living in a PG. One day his landlady had trouble with water leakage in the tank and the plumber came only after the entire tank emptied! This struck Vamshi like a eureka moment. He wanted to devise an app which would act as an aggregator for all domestic and home services and so Co-Founded FixU with help of Nikhil lagishetty. FixU is an online web based app which acts as an aggregator for all plumbers, carpenters, electricians etc., who can be called to fix anything in your home, office. The response time is apt and is never more than 10-15 minutes.with a quote  ”We fix your tap leakage before your tank is flushed off”. Vamshi explained , FixU is bootstrapped as of now and is on the lookout for investors.