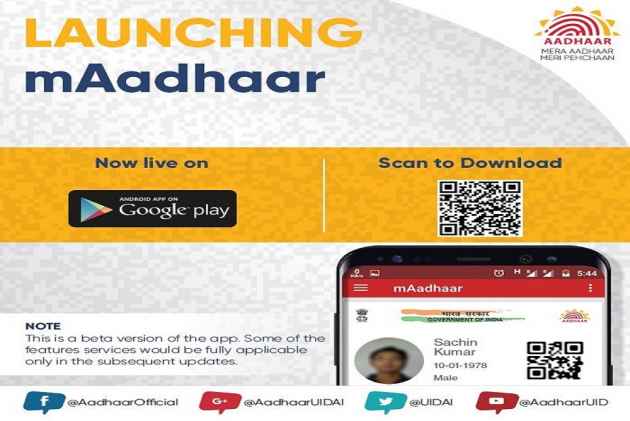 UIDAI launches mAadhaar app- Here’s all you need to Know!!

The Unique Identification Authority of India (UIDAI) has now launched an application named mAadhaar. The app allows Indians to carry their virtual Aadhaar card in their smartphones. The app is currently available only on Android for free, but UIDAI plans to bring it to iOS soon. The news was released by UIDAI on the official Twitter account.

How Does it Work?

mAadhaar has been designed by the Unique Identification Authority of India (UIDAI) which links one’s Aadhar number and allows Android users to carry their Aadhaar demographic information i.e. name, date of birth, gender and address along with his/her photograph.

The users can share their Aadhaar profile and data with third-party applications via NFC, QR codes, barcodes or even email their details.

mAadhaar app also enables its users to lock their Aadhaar data using a biometric locking system. That said, users can later on completely disable the locking feature from the setting option. Apart from that, the mAadhaar uses a unique Time Based One Time Password (TOTP) feature for verifying your credentials.

Why should you use mAadhaar?

Nowadays the only place where you don’t need to use a card is only when you want a new Aadhaar card. This application will help their users in managing cards. The application will allow a more authentic way of carrying your virtual Aadhaar card on the go. With Biometric lock system the users can be safe regarding their information to be leaked.

UIDAI launches mAadhaar app- Here’s all you need to Know!!