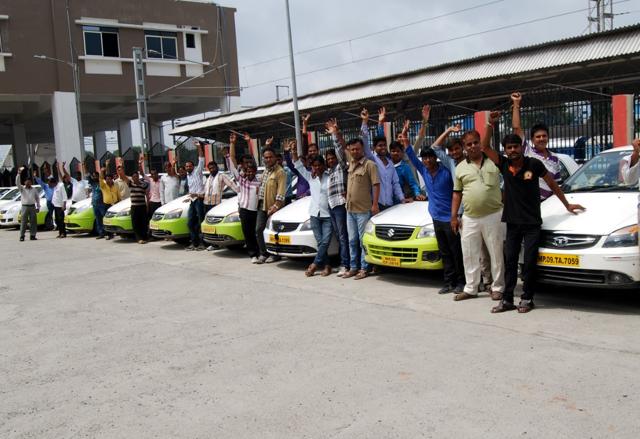 If you are a frequent user of Cab sharing services like UberPool and OlaShare, it’s time for you to choose an alternate way for your daily transportation, as the trouble for the Cab Aggregator seems to go on and on.

After Hyderabad and Bangalore, Uber and Ola’s drivers have are initiating a five-day strike in Delhi NCR region after the state government had decided to call a ban on ride-sharing services of Uber and Ola. Over 300 drivers of both the firms have gathered at Jantar Mantar to protest against the ban.

The drivers are demanding that their fare should be increased from the existing Rs 6 per kilometer. The protestors said that on Monday no commercial taxis and autos will be allowed to hire in Delhi-NCR if their demands are not met.

Sarvodaya Driver Association of Delhi and Leaders from both the cab aggregators together have called the strike and also started a hunger protest. Disgruntled drivers said their earnings had come down to as low as Rs.20,000 per month. The drivers are facing difficulties to pay service loans for their vehicles.

When asked to a driver he said: “Our fares are even less than auto rickshaws, we are charging Rs 8 per km and on top of that we have to pay 25% commission to the company. We are left with only around Rs 5,000. Earlier, we got Rs.2800 on doing trips worth Rs.1800; now we get only Rs 1800. Our Incentives have dropped to 80%, which is making us very difficult to run our homes.”

Reports are that fellow drivers in Delhi are distributing flyers across the city and urging all the drivers to join the protest. The source also claimed that their demands included a 24×7 call center, accident and health insurance, increase of tariff from Rs 6 per kilometer at present, lesser targets, higher incentives, and others.

The Government of Karnataka was the first to question the legality of Ola Share and Uber Pool. Both companies got to court claiming that they didn’t break any rules. However, the protest was useless worked out as the government has banned the cab sharing system. Karnataka was also the first state to ban two-wheelers taxis by Ola and Uber in March last year. Read more news.