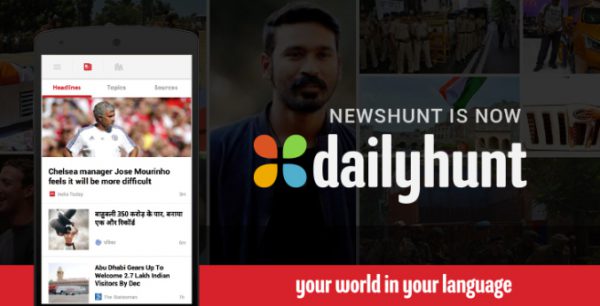 Formerly called Newshunt, Dailyhunt (Ver Se Innovation Pvt. Ltd.) announced in a statement that it has raised $25 million (approximately INR 168 crore) in a series D funding round led by ByteDance. Existing investors Sequoia Capital, Matrix Partners, Omidyar Network, and Falcon Edge Capital, who have together invested near about $40 million into the business since October 2014, also participated in the fresh rounding of funds. Arun Sarin, former CEO of Vodafone who earlier became the talk of the town for a fresh funding round into the same, was also present there.

Virendra Gupta, Founder and CEO of Dailyhunt said, “Dailyhunt has grown by partnering with publishers, developers, advertisers and other ecosystem partners. We want to thank our partners for their support and reaffirm our commitment to the local language digital ecosystem. The investment by ByteDance, who has done this at scale, reinforces our belief in the opportunity. We look forward to learn from ByteDance on personalization and large scale machine learning to continue to offer a unique experience to our users.”

The latest funding comes after almost 15 months later from its last C round funding that was led by New-York based hedge fund Falcon Edge Capital with INR 250 crore. According to the reports, the newly raised fund will be employed in producing and distributing media content that consists of short form audio and video to target local language users. With a view to offer unique user experience, the company will acquire knowledge from the ByteDance team on personalization and large-scale machine learning. Read more startup news.

Bangalore based Dailyhunt is a great platform of choice for local language mobile internet users that was launched as Newshunt by ex-Nokia executives Umesh Kulkarni and Chandrashekhar Sohoni in the year 2009. It came to light as an app on Symbian, an operating system for Nokia phones and later on it sold to Ver Se’ innovation in 2012. It was later rebranded as DailyHunt in August 2015. Moreover, the company has also merged with news publications like Malayala Manorama, Amar Ujala, Dinamalar, Loksatta, Kannada Prabha, AnandaBazar Patrika and others in order to cast the required content. Read more funding news.

Currently, DailyHunt app serves content from more than 175 publications in 15 Indian languages including English, Hindi, Telugu, Marathi, Punjabi, etc. Nevertheless, it also claims more than 28 million monthly active users that are nearly one third of the most renowned global news aggregator, Flipboard that has over 90 million monthly active users. With almost 35,000 publishes per day, it records over 4.5 billion monthly page views. Well, in this time when the ride of new entrepreneurs is getting more and more stringent, raising a funding of $25 millions seems to be a really great move by the company.