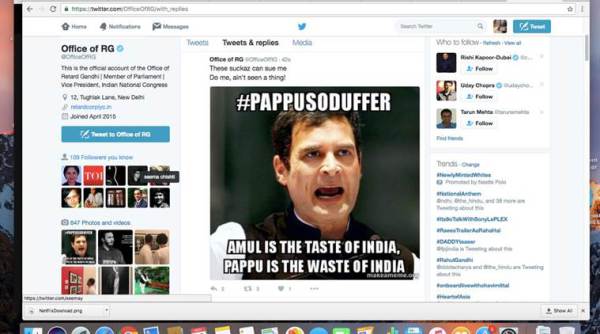 In a shocking incident, Congress Party’s vice – president, Rahul Gandhi’s Twitter handle was hacked on Wednesday evening! A series of abusive tweets were then sent to his 1.21 million followers from his handle for about an hour or so. Rahul Gandhi’s Twitter handle was hacked by a hacking group known as ‘legion’. The tweets sent were outright abusive towards Rahul and his family. Later on Wednesday evening, the Congress Party had announced that it will lodge a complaint against the hacking group with the Delhi Police. “We will lodge a formal complaint with cyber police, hope the government will show sincerity and purpose while investigating and punishing them”, party spokesperson, RS Surjewala said. Whoever hacked Rahul’s twitter account soon changed the bio of the handle. Rahul Gandhi does not tweet personally, and his handle is managed by his office. After his party members read the tweets posted, there was a big chaos and outrage in the office of the Congress Party. Read more on Hacks

This is not the first time that twitter or other social media accounts of celebrities have been hacked. Prior to this, a hacking group called OurMine had hacked the Pinterest account of Mark Zuckerberg, the social media website, Facebook’s founder and CEO. The same hacking group had hacked Pokemon Go servers, Jack Dorsey’s and Sundar Pichai’s Facebook accounts in July, this year. Similarly in the month of October this year, Pakistani hackers had managed to hack the servers of fifty Hyderabad – based IT companies. The accounts of 50 million yahoo users were also hacked in the month of September this year. Hackers are getting more skilled at hacking by the day. They pose a serious threat to celebrities and big organizations as they could easily misuse the information that they had hacked or they could black mail people for a ransom if the victims do not want them to reveal sensitive stolen information. Celebrities and big corporates alike must install the best in class anti – virus and anti – spyware protection in their PC’s to protect their social network accounts from hackers lest it would become a disaster for them and for the nation as a whole, if their personal or sensitive information is leaked or misused. The anti – virus, anti – malware and anti – spyware making software companies like MacAfee, KasperSky, Norton, Nod32 etcetera must provide online upgrades to their products so that users are given upto – date and good protection against hackers and viruses. Read more on Startup News